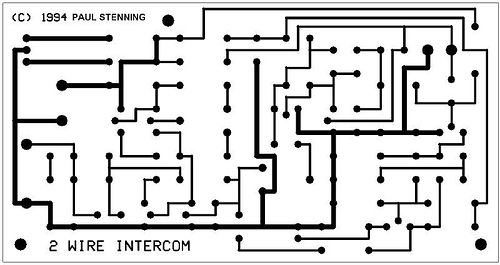 The requirement for a talk switch at each end on a two-wire system complicated the design slightly. Capacitor C17 is connected in series with the remote speaker, and is short-circuited when the talk switch is pressed (R22 limits the discharge current). The electronics at the local end detects the DC path when the switch is pressed.
TR3 and the associated components form the first audio amplifier stage. When a low resistance DC path is present between SK1 and SK2, TR1 will switch off, allowing TR3 to be biased by R6. The audio signal is coupled to the base of TR3 by C1 and C2.

R1 reduces the input impedance to reduce the chance of noise pickup along the long connecting lead. C3 and C5 remove any RF interference that may be present and limit the top end of the frequency response to about 4KHz. The low values of C2 and C8 limit the lower end of the frequency range to about 200Hz. This frequency response is adequate for speech, and allows a high gain to be achieved with minimal problems due to hum and noise.

Since TR3 is biased off when the unit is not in use, the gain is low and no hum or noise can be heard.

TR5 to TR8 and surrounding components form a basic class B audio output stage, with a power output of about 200mW RMS into 8R. VR2 is adjusted to give a quiescent current of 2mA, to minimise crossover distortion. Preset VR1 sets the audio gain. In use this will probably be set to maximum, although it is useful to be able to reduce this when testing to avoid feedback.

TR4 and surrounding components form a standard RC phase shift oscillator. The output of this is fed into the power amplifier via R16 and C9. TR2 has been added to short out the signal at one of the phase shift points, disabling the oscillator. This transistor is normally held on by R3, however when one of the talk buttons is pressed it is turned off for about half a second. This time is set by the values of R3 and C4. Thus the oscillator produces a brief tone when a talk button is pressed.


The circuit is mains powered using a small six volt transformer. Since the current requirement when the unit is silent is minimal, a 100mA transformer is adequate. The supply to TR3 and TR4 is additionally decoupled by R4 and C13.

The circuit is assembled on a single sided PCB. Assembly is straightforward and should present no difficulties. None of the component values are critical, there should be no problems using the value above or below if the correct part is not available. If you are using different transistors, ensure that TR7 and TR8 have a maximum collector current rating of at least 100mA.

Ceramic disk capacitors can be microphonic and are not recommended for C2, C3 and C5. The oscillator phase shift capacitors, C6, C7 and C10, should have a good Q rating or the circuit may fail to oscillate. Ceramic disk and dipped polyester types are fine, but the small resistor sized tubular devices are not suitable.

The PCB should be mounted in a suitable enclosure, together with a loudspeaker. A similar box will be needed for the remote unit. The prototype system was built into a pair of small stereo loudspeaker cases, containing 16R oval speakers. These are readily available at car boot sales for a few pounds, complete with a matching defunct stereo record player!

Suitable holes should be made on the top surfaces of both case, for the push button switches. The PCB and transformer can be mounted in any convenient position, in one unit. A suitable connector should be fitted on the rear of each unit for the interconnection cable. If the installation will be reasonably permanent, electrical choc-block connectors will suffice.

The units should then be wired up as shown in figure **. If the interconnection cable does not have polarity markings there is a 50% chance that C17 will be the wrong way round! In this case fit two 220uF capacitors in series but opposite ways round as shown.