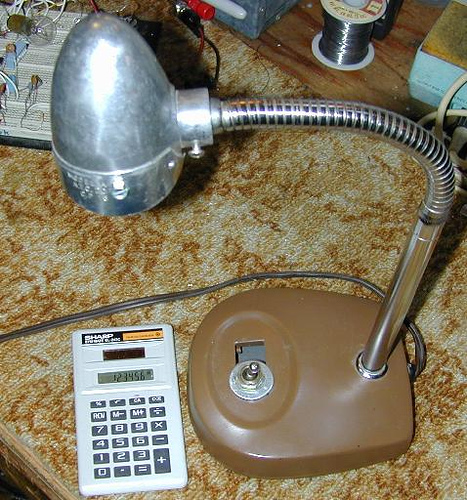 This is a minimal parts lamp made with four white LEDs. It features regulated light output from 10V to around 20V and works well as a flashlight. Operating Current is 40ma
Theory

The LM317L and resistor act as a current regulator set to 40ma. Current flows from the battery through one pair of LEDs, through the regulator, through the other pair of LEDs, and back to the battery. The capacitor filters out noise on the power supply lines. The LED pairs must be matched so that the current through them is roughly equivalent. Small resistors could be placed in series with each of the four LEDs to improve the balance, but the parts count would go way up.


There is one trick with this circuit, matched pairs of LEDs must be used. Normally, a batch of LEDs from the same manufacturer will be matched close enough for this application. If unmatched LEDs are used, one LED per pair will be bright and the other one will be dim. It is best to first build the circuit on a plug-in proto board to verify that the LEDs light evenly.

A small circuit board was made using press-n-peel blue film, the board was cut into a circular shape using a nibbling tool. The parts were soldered in, and the board was mounted inside of the bottle cap. The bottle cap protects the LEDs and prevents bright light from coming out of the side of the assembly. The cap came from a 1 Liter “Aqua Fina” brand water bottle. The single screw can be used to mount the assembly to an external bracket.

The completed circuit board and cap assembly was mounted in an old automobile turn signal. The lamp head was mounted onto the end of an old fluorescent lamp base with a goose neck adjustable arm. The resulting lamp is quite effective for night reading, and it’s not too ugly.