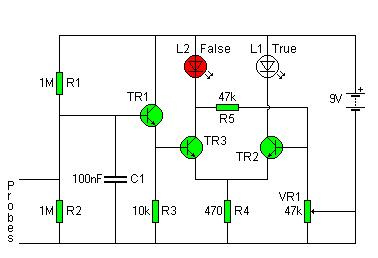 This circuit is based on the fact that a person skin resistance changes when they sweat (sweating because they are lying). Dry skin has a resistance of about 1 million ohms, whereas the resistance of moist skin is reduced by a factor of ten or more.
Resistors R1 and R2 form a voltage divider. They have resistances of 1 000 000 ohms (1 mega ohms) and, because their values are equal, the voltage at the upper probe wire is half the battery voltage (about 4.5 volts).

Capacitor C1 functions as a smoothing capacitor and removes the 50Hz induced mains hum that is found on a person’s body.

Transistors TR1 and TR2 act as a voltage comparator. If the voltage at the base of TR2 is higher than at the base of TR3 then the green LED (L1) will come on. If the reverse is true then the red LED (L2) will light.