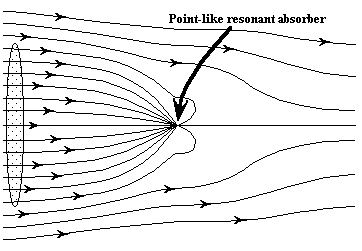 This article is about the ability of an LC resonator to “funnel” incoming electromagnetic waves towards tiny antennas.


These antennas behave as if they were much larger than their physical diameter, as if there was an “invisible lens” focusing more of the incoming EM energy upon the antenna. In conventional terms, it’s about enhancing the EA (effective aperture) of small antennas.


An “electrically small” antenna is one where the physical antenna size is far smaller than the EM wavelength being received. At first glance, electrically small antennas aren’t all that strange. If we use them to transmit radio waves, they work just as you’d expect. In order to force a tiny antenna to send out a large amount of EM energy, we can simply give it a huge driving signal (high voltage on a tiny dipole, or high current on a tiny loop antenna.) If the EM fields are strong at a distance of 1-wavelength from the small antenna, then the total EM radiation sent out by the antenna will be significant. It’s almost as if the EM fields themselves are acting as the antenna. Weak fields act “small,” while intense fields behave as a “large” antenna. This explains how a tiny antenna can transmit lots of EM. But what about reception?