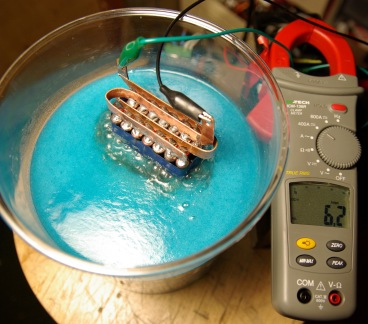 This is a simple project that is used to create Hydrogen and Oxygen gas by electrysis of water. The aim was to get good gas production rates without using extra chemicals or eroding the electrodes
By placing two electrodes (metal plates) into water we can create an electric field between them by connecting them to the terminals of a battery or power supply. The positive electrode is known as the anode, while the negative one is the anode. Pure water actually does not conduct electricity so it is not suitable to be used without adding something to the water. Tap water already contains many dissolved compounds which allow the water to conduct. The ions formed in the water will be attracted to the electrode of opposite polarity, i.e. the positive hydrogen ions will move towards the cathode, while the negative oxygen ions move to the anode. Once the ions reach the surface of the electrodes the charges will be neutralised by adding or removing electrons. The gas is then fee to bubble up out of the remaining water to be collected

The electrodes are typically made from metal or graphite (carbon) so that they can pass electricity into the water. It is important that the chosen material does not react readily with oxygen or one of the dissolved compounds otherwise reactions will occur at the surface of the cathode (negative electrode) and the water will become polluted with the products of the reactions. You will see an example of this below when copper electrodes are used. This also means that no or very little oxygen gas is released as it gets combined with the metal electrode and remains in the container.