The Half Wave Dipole or Hertz Antenna 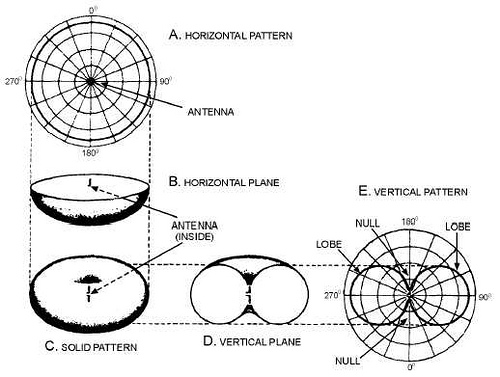 The dipole antenna dates back to the early RF experiments of Heinrich Hertz in the late 19th century. It consists of a conductor that is broken in the center so that RF power can be applied to it. One can think of the half wave dipole as an open circuited transmission line that has been spread out, so that the transmission line can radiate a signal into space.
A dipole can be any length, but it most commonly is just under 1/2 wavelength long. A dipole with this length, known as a resonant or half wave dipole, has an input impedance that is purely resistive and lies between 30 and 80 ohms, which provides a good match to commercially available 50 ohms coaxial cables as well as commercial transmitters and receivers, most of which have 50 ohm output and input impedances. The length of a dipole can be approximately determined from the following formula:


where:
l is the length in feet and
f is the frequency in MHz