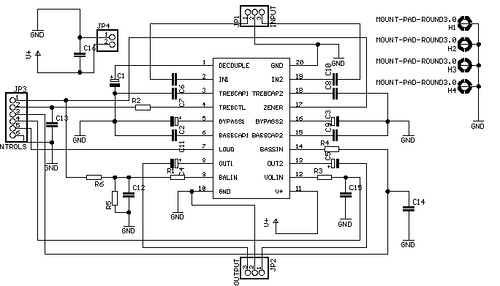 One of my most ambitious projects, this mixer was made for my friends Tony and Wilfred of Mixed Fruit Jam as a practice amp. It is a relatively straightforward design, and will probably not be the best way of doing this. However, it works fairly well, and is relatively inexpensive to build.
Overview

Six independent microphone amplifiers with up to 60dB gain (theoretical, not tested). Each channel has an independent fader and an attenuator to allow connection of musical instruments which have line-level outputs (such as synthesizers).

Mixer to combine all the six channels to a single monoaural output. This is available as the effects-send output (line out). Two stereo line-level inputs are provided, line-in (effects-receive) and aux-in. These are mixed together (no faders available, though), and sent to the next stage.

The mike preamp itself is based on the LM837 Low-noise audio opamp from National Semiconductor. The first stage is a noninverting 26dB gain stage (fixed). Note the use of the 33pF capacitor in the feedback loop, this reduces the tendency of the LM837 to oscillate (it has a large bandwidth of 17MHz). Two 5.1V Zener diodes are connected back-to-back across the input, to protect the amplifier from large voltage transients at the input.

The next stage is an inverting variable gain stage (-‡ to 60dB), again with a 47pF capacitor across the gain-control resistor. The pot used here should be of high-quality to prevent crackling, etc. Also, the wires should be tightly twisted and shielded to prevent noise and mains-hum pickup. The last stage is an inverting buffer (unity gain), to correct the inversion caused by the variable gain stage.