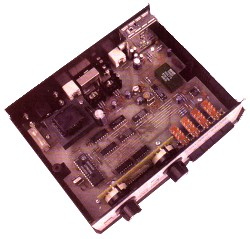 When servicing and repairing televisions and other items of video equipment, it can be helpful to have a stable and recognisable test signal.
A colour bar pattern is often used for this, and indeed many television and video recorder service sheets use this type of signal as a reference.

A variety of other patterns are used for specific tests. For example, a crosshatch is useful for checking picture linearity and convergence (colour gun alignment), while a checkerboard pattern or dots are ideal for setting up the focus.

The test pattern generator described here features these patterns as well as horizontal lines, vertical lines, dots, blank raster and white screen. The three primary colours are individually switchable. So for example the white screen can be switched to red, green or blue for checking colour purity.

There have been several designs for test pattern generators published in the past. Many of these are monochrome only and are often based on the ZNA234E IC. Published designs for colour units are often complicated, and therefore probably too expensive for occasional home use.

The aim of this design was to produce a straightforward reliable piece of equipment with no unnecessary frills and features. It should be possible to construct the unit for around seventy pounds including the case, which is much cheaper than commercial units having a similar specification. Setting up is straightforward and requires no test equipment.

This unit is an improved and updated version of a project by the same author, which was published in the March 1994 edition of “Electronics in Action” magazine. The original design was one of the most popular projects in the magazine, with over one hundred PCB’s being sold. Since “Electronics in Action” is sadly no longer being published, and a couple of the components used in the original design are now obsolete, it was felt that now is the right time to publish this revised version.


A major improvement with this version is that construction has been simplified. The circuit is built on two PCB’s, and requires no interwiring. The white level can now be switched to either 75% or 100%, so that the colour bar pattern can give a proper white reference level. The original Astec modulator is no longer available, so this unit uses an Alps modulator from Maplin. Since this modulator has sound capabilities, a 1KHz audio tone generator has been added. Other modifications have been carried out to improve performance and reliability.

The instrument is mains powered. A standard composite video output is available (1V pk-pk into 75R), as well as UHF modulated (UHF channel E36). An oscilloscope trigger output is also available, which is switchable to either line or frame sync, or to the audio oscillator.

The circuit diagram is shown in figure 1. Most of the complicated stuff is handled by IC1 and IC2, which helps to simplify the remainder of the design. IC1 (SAA1043) is a universal sync generator, whose timing is controlled by XT1. In this design it is configured for the UK standard 625 line interlaced PAL, and four outputs are used.

IC1 requires a supply voltage between 5.7V and 7.5V. The SAA1043 has been operated with a 5V supply in several published designs (including some Maplin projects and the original version of this design). However experience has shown that a limited number of devices will not operate correctly at this voltage.

Since the current consumption of IC1 is very low (less than 1mA), it is powered by a 6V8 supply, which is derived from the 12V supply by a zener diode (D3) and resistor (R14). The output signals from IC1 are reduced to suitable levels for the 5V logic circuits by means of resistors (R15 to R19) and diodes (D4, 5, 6 and 9).

A 5MHz clock signal is derived from XT1. This controls the first binary counter (IC3, 74HCT4040), which is reset at the end of each line by the CB (composite blanking) signal. 258 clock pulses are counted by IC3 between each blanking pulse.

A second binary counter (IC4, 74HCT4024) counts the 312 or 313 CB pulses within a frame. This counter is reset by the VERT signal at the end of each frame. The fact that the counter has a capacity of only 128 is irrelevant in this case, since it merely wraps round.