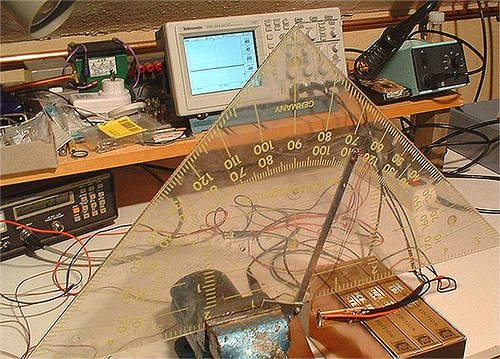 A cheap and easy way to add an elevation sensor to an existing antenna systems is described here. The Analog Devices accelerometer chip ADXL202E is the core device.
It can be used for microwave antenna systems where only some degree of elevation is necessary and, with some additional efforts, also for arrays where full elevation readout is needed. The chip is designed to be used in navigation systems, vehicle security systems and 2-axis tilt sensing. Many applications can be found in the web. The ADXL202E has a measuring range of +/- 2 g (one g is earth gravitation) and resolution of down to 0.2 mg. The device has two analog outputs (one for each axis) and two duty cycle outputs (one for each axis).


The raw drawing of the prototype circuit diagram, ugly but works. The Y-axis duty cycle output is low pass filtered (abt 300 ms time constant) and fed to an op-amp in offset/trim gain configuration. The X-analog output has high bandwidth and is used as horizontal shock sensor. Watching the shock signal on a waterfall screen while rotating the antenna is a great tool to find the “least windload position” of the antenna in stormy conditions.

A test circuit was built and tested for linearity and repoducebility. Ambient temperature could not be altered very much, has to be done later. Very likely, the output signal drift over temperatur has to be compensated with a NTC. Tests on that pending.