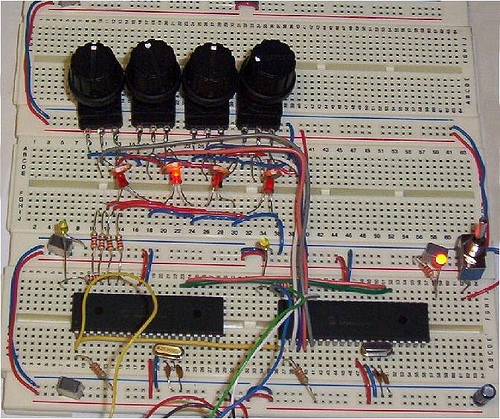 This observation is about a machine (pic) learning a sequence from another machine (pic), without any human intervention and with no more feedback than a percentage correct.
One pic takes a random sequence, and the other has to learn what this sequence is. In the run in the screen shot below the correct sequence (1-3-2-4) was learned after 44 tries. After that the student pic answered correct 100% of the time.


The sequence consists of four steps. All possible combinations of 1,2,3 and 4 are allowed. So 1-2-3-4 is permitted, but so is 2-2-2-2. Anything goes, as long as it consists of four steps. The sequence is represented by LEDs. For example sequence 1-1-1-4 would mean flash LED 1 three times and LED 4 one time. The students guesses using his four LEDs. The teacher has four LDR’s to detect the student’s sequence. Both pics are connected by usart serial so the teacher can relay to the student the score for his attempt (0 – 100% correct).