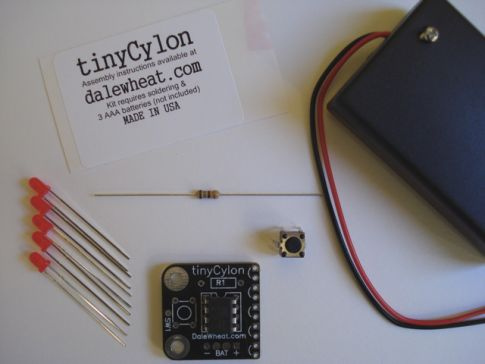 Tiny Cylon is a small kit that creates 10 different LED flashing patterns with 5 red LEDs, an Atmel ATtiny13 microcontroller, and a 4.5VDC battery pack. In other words it’s an LED blinky PCB easy to assemble and easy to operate.
Surface mount LEDs were selected as replacements for the kit’s T-1 LEDs. Any 0805 package SMD LED should work. Likewise, the all red 3mm LEDs were replaced with three different color SMD LEDs in this pattern: red – green – yellow – green – red.

The 4.5VDC battery pack is way too bulky and cumbersome diminutive version. A smaller more portable battery supply was needed.The Ttiny13 microcontroller is able to support a supply voltage of 3VDC. Therefore, a 3V lithium battery was substituted for the 3-AAA cell battery pack

Test your solder connection by carefully tweaking the anode connection with the tip of your tweezers. If it’s a solid connection, add a small blob of solder to the round pad on the underside of the tinyCylon PCB that is directly adjacent to the square pad (e.g., to the right of the square pad when looking at the LED pad end of the PCB) and connect the cathode terminal to this round pad.