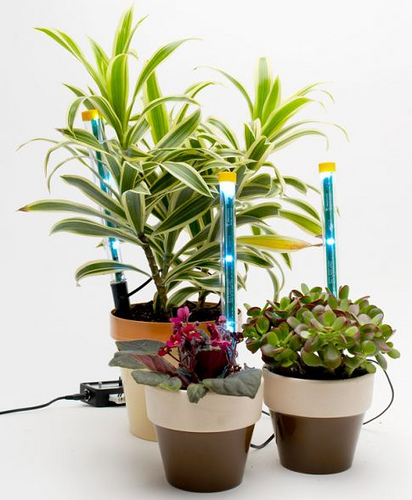 The season has an even worse effect on your plants. Many common houseplants need far more hours of light than they get naturally in the middle of February, especially if they don’t have direct exposure to a sunlit window
Specialized grow lights that closely mimic the sun’s rays are a better solution, but you can get the same effect with special LEDs that are also brighter, cheaper and last far longer. These bulbs actually work best as a supplement to sunlight during the day; however, they’ll also provide enough light after dark to ensure that your plants get the 12 to 18 hours a day they need to thrive. We connected three inside a clear plastic tube, a “light spike” that you can stick right into the pot for direct exposure, and added a controller that adjusts the brightness. Or you can string together multiple spikes to cover several plants at once. The system should keep your plants in great shape until springtime—just don’t forget the water

1 Assemble the control box
Mount the power-connector jack inside the box and the 10-position header, which connects the spikes to a wall outlet, on the side. Attach pins from the header to the jack’s terminals. Optional: To add a circuit to the box that can vary the LEDs’ intensity, follow the schematic here.


2 Build the light spikes
Cut the wire inside the LED design kit into five equal lengths. Attach the red wire to the red connector, and the black wire to the black connector, on each LED strip. Slip each strip inside a clear tube, and seal it so it’s watertight.

3 Add the two-position connectors
These connect the spikes to the box. Attach each one to the red and black wires from each LED strip.

4 Let the sun shine in
Press a spike into your plant container. Keep all wiring, electrical connections and the LED strips away from soil and moisture. Plug the spikes’ two-position connectors into the control box’s 10-position header, and connect the power supply to turn the LEDs on. If applicable, adjust the control circuit.