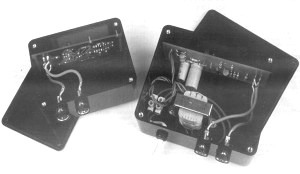 This project allows you to take the video recorder and satellite receiver remote controls upstairs, and operate the equipment from there. There is no additional cabling to install, the signal being carried along the existing coaxial aerial cable linking the two rooms.
Circuit Description

For now, assume that the two sections of the circuit are connected directly (SK1 joined to SK3).

The infrared receiver circuit is shown in figure 1A.

D1 is the IR photo-diode and IC1 (TBA2800) is the infra-red amplifier. This IC contains three stages of amplification, the first of which has an automatic gain adjustment system to cope with varying signal and ambient light levels. The second amplifying stage simply provides further amplification, and the third separates the wanted signal from the general background noise. An inverting stage is also provided to give both positive and negative outputs.

The overall gain of the IC is quoted as 70dB, and the typical current consumption is 1mA at 5V.

C3 and C4 are the coupling components between the amplifying stages. The values of these have been chosen to give good coupling at the IR transmission frequency, while rejecting lower frequency noise and interference. C2 is the filter component for the automatic gain control of the first amplifier in U101. The power supply to IC1 is decoupled by R1, C1 and C5.

The circuit is powered from the other section of the circuit via SK1. D2 and R15 provide a regulated 5V supply to IC1, while D4 and C1 ensure that this supply does not vary significantly when the LED is pulsing.

The infrared transmitter and power supply circuits are shown in figure 1B.

The variations in supply current to the receiver section cause a varying voltage drop across R14. This is converted to logic pulses by TR5 (BC558). C12, R10 and D9 cause short (40uS) pulses to be applied to the base of TR4. TR4 (BC548) and TR5 (ZTX650) are in a Darlington arrangement, and drive the infrared LED.


The infrared LED (D7) has a maximum continuous current rating of 100mA, which would give a range of only a few centimetres. However the device has a pulse rating of over 2A, providing the duty cycle is short and the mean current does not exceed 100mA.

This gives a much improved range and is the technique used in commercial remote controls, as well as this unit. C11 acts as a reservoir for the LED current, and is charged when the LED is not lit via R13. The current to D8 is limited to about 2.5A by R9; a red LED (D7) and series resistor (R8) are connected across R9 to give a visual indication that the unit is operating.

The circuit is powered by a small transformer, giving an unregulated supply of about 18V across C10. The supply reaching the infrared receiver section will be about 12V. A 100mA transformer is adequate since the current consumption is only a couple of milliamps when the unit is idle.

The DC voltage is isolated from the TV/video equipment by C7 and C13. 100pF ceramic disc capacitors are used, which give good coupling at UHF frequencies. The high frequencies are blocked by L1 and L2, which prevent the circuit from loading the signal.

There will inevitably be slight attenuation to the UHF signal; this has not been measured due to the author not having suitable equipment! No picture degradation occurred with the prototype, although some problems may be experienced in very poor reception areas. This would only occur on off-air signals, as the signal strength from the UHF output of a video recorder or satellite receiver is generally fairly high.

The PCB overlays are shown in fig 2. There is nothing out of the ordinary about the PCB assembly – simply fit the components in the usual size order. D7 and D8 must be fitted on the solder side of the PCB, with their tops about 12mm above the PCB surface. D3 is mounted at the same height on the component side of the other PCB. D1 should be mounted at the full length of its leads, and then folded over so that the flat side lays against IC1.

Terminal pins should be used for the off-board connections. Those for SK1 and SK2 are inserted from the component side so that wires may be attached to the solder side.

There are four holes for terminal pins around IC1 and related components. These may be used to secure a screening can (made from tin plate) if the receiver is prone to interference. This was not necessary on the prototype.

The infrared receiver is housed in type MB2 plastic box, 101mm * 76mm * 39mm. A rectangular window should be cut in one side, approx. 55mm * 24mm, positioned 12mm from the left end. Remove any PCB mounting guides from this area. A piece of red filter material is then fitted behind the cutout, and held in place with superglue. If the filter has a non-reflective surface this should face outwards. The PCB is positioned in the PCB mounting guides in the case, immediately behind the window. The two coax sockets are fitted on the opposite side of the case to the window, and require a 12.7mm (1/2″) mounting hole.