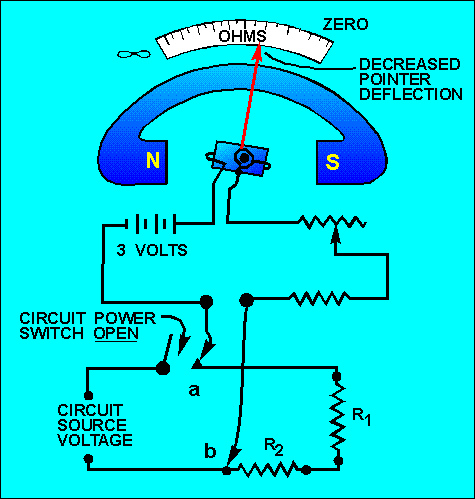 The two instruments most commonly used to check the continuity (a complete circuit), or to measure the resistance of a circuit or circuit element, are the OHMMETER and the MEGGER (megohm meter). The ohmmeter is widely used to measure resistance and check the continuity of electrical circuits and devices.
The ohmmeter’s pointer deflection is controlled by the amount of battery current passing through the moving coil. Before measuring the resistance of an unknown resistor or electrical circuit, the test leads of the ohmmeter are first shorted together, as shown in figure 1-31.


If the leads were left connected, they could come in contact with each other and discharge the ohmmeter battery. When the variable resistor (rheostat) is adjusted properly, with the leads shorted, the pointer of the meter will come to rest exactly on the zero position. This indicates

The interruption of current and the spring tension act on the movable coil assembly, moving the pointer to the left side (∞) of the scale.