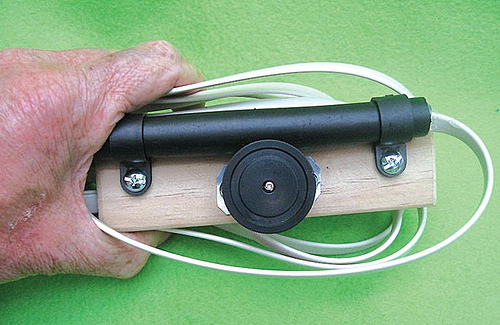 Lamenting the passing of local AM radio? Desert island or outback mining camp based? Unable to clamber up on the roof for a long wire aerial anymore? Here is a simple medium wave tunable loop that, even indoors, will bring signals out of thin air.
Way back in 1965, country music star Connie Smith sang about a “tiny blue transistor radio”. The “trannie” was then the height of desirable consumer hi-tech. The ability to take pocket music and news with you was near-revolutionary in an era when almost everything electronic was wired to the mains.

These early portable radios were AM (Amplitude Modulation) only, covering the 520kHz –1650kHz medium wave (MW) broadcast band, with a significant part of their appeal due to the inbuilt radio-signal-concentrating ferrite rod antenna. Mains powered MW radios prior to this era had used bulky wire loops or lengthy external aerials, neither of which suited portability.


Ferrites are iron-based magnetic materials and an aerial coil wound around such a rod could be brought to resonance via a variable tuning capacitor within the radio circuitry itself. They’re convenient and very compact and usefully offer good broadside directivity, arising from response to the magnetic component of the radio signal.

However, their efficiency is much less than a traditional antenna, a fact now often forgotten. Although ferrite rods are further hindered by an upper frequency limit of just a few MHz, almost all portable radios made in the last 50 years have used them for MW reception.