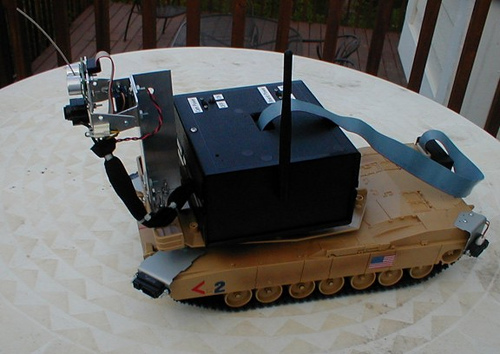 Looking very similar to a tank, this has a on-board 1.2GHz wireless camera and a RF modem attached to the robot and wheel drive mechanism. You can control the tank remotely using the camera (and built in microphone) for feedback, similar to the real Mars Rover.


Below is a block diagram of the bot as it exists currently. The DARC Board is the brains, taking inputs from the IR range, Sonar range, and temperature sensors. The RF Modem is a bidirectional link to the command station providing both input in the form of command and output as data is transmitted back to the control station from the various sensors on demand.

The sensors can also trigger an automatic transmission when a command to move is in conflict with the sensory data that is collected. For instance if I tell it to drive forward 30 cm and the IR Ranging sensors detect an object ahead in 10 cm it will send me a proximity alert and abort the command. I can override this though I use the video camera carefully to survey before doing so. Notice the video camera is not included in the system diagram as it operates completely independently from the DARC Board and other circuitry including its own power supply. The video data is in no way fed back into the system as the other sensors are. This would greatly complicate the system and the DARC Board would not be up to the task.