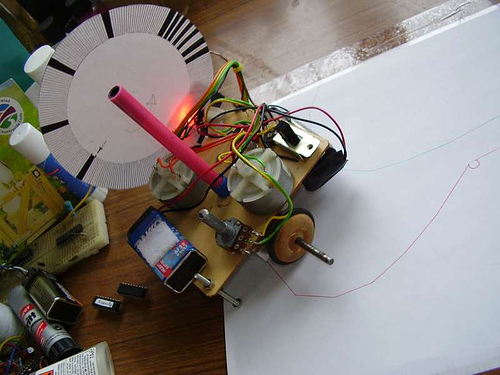 This is a robot which carries a paper disc. Although handwriting is quite a difficult task for robots, this is an example of a writing robot.
The disc is carried by the robot rather like music on a music stand, it bears on one of the robot’s axles,which rotates it so that the code passes in front of a simple light pen. This works a relay which reverses the motor driving the other axle. A felt-tip is carried in the middle which traces out a simple pattern according to the program. A disc about 3 inches diameter is big enough, the novelty of writing the programs soon wears off.

This next one is similar, but uses an electronic memory to store the program which it scans by rotating once on the paper disc, there is a downwards-pointing light pen at the end.


A read/write switch is then pressed and a felt-tip placed in the pen holder situated between the two axles, the robot then draws in accordance with the program it remembered from the paper disc. As with the previous robot only one of the motors reverses. The circuit shown is very laborious to build, this would all be done with a microcontroller nowadays, however it very effectively demonstrates how a computer works.

This one is similar to the previous one but it uses the scanned code to switch a single-channel radio transmitter taken from a cheap radio-controlled car. It doesn’t have a pen holder and has only one wheel as it only goes in circles. The third balance-point is provided by the light pen.