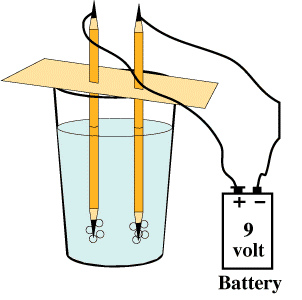 Electricity is created when certain chemicals react together. We use chemically- made electricity to power many machines from flashlights to a watch or sometimes a car. Yes, there are cars that run on electricity! The devices that store electricity are called batteries. Electricity can also be used to produce chemical changes.
Water is a simple chemical made from two gases — hydrogen and oxygen. Every molecule of water has two atoms of hydrogen for every atom of oxygen. H2O is the chemical formula for a molecule of water.

If an electrical current is passed through water between electrodes (the positive and minus poles of a battery), the water is split into its two parts: oxygen and hydrogen. This process is called electrolysis and is used in industry in many ways, such as making metals like aluminum. If one of the electrodes is a metal, it will become covered or plated with any metal in the solution. This is how objects are silverplated.

What you will discover ?

As the electricity from the battery passes through and between the electrodes (the pencils), the water splits into hydrogen and chlorine gas, which collect as very tiny bubbles around each pencil tip.

How can you get chlorine from H2O? Good question! Sometimes in experiments, a secondary reaction takes place. This is what happens in this experiment.

Oxygen is not given off in this experiment. That’s because the oxygen atoms from the water combine in the liquid with the salt to form hydroxyl ions. Salt’s chemical formula is NaCl – sodium chloride. The chlorine gas is from the chloride in the salt. The oxygen in the hydroxl ions stay in the solution. So, what is released in this reaction is not oxygen but is chlorine gas that collects around the pencil tip. Around the other pencil is hydrogen gas.

In real electrolysis systems, a different solution is used, and higher levels of electricity help to split the water molecules into hydrogen and oxygen without this secondary reaction.