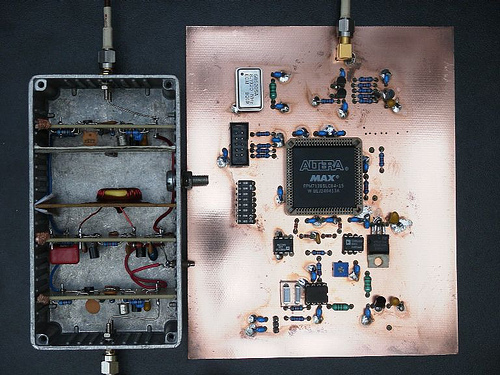 An experimental fractional-N frequency synthesizer using a CPLD.
Fractional-N synthesizers work by periodically changing the division ratio from N to N+1 and back such that the average is N + F/M where 0¡ÜF


Fractional-N synthesizers first appeared in the late 1960s and early 1970s. The earliest compensation schemes applied analogue correction to the VCO control line. A notable design was the synthesizer by Nigel King for the RACAL RA1792 communications receiver. A breakthrough came in 1984 when John Wells of Marconi Instruments invented an entirely digital scheme based on the principle of noise shaping.?

Noise shaping concentrates the quantisation noise produced at the PFD output into the higher frequencies where it is removed by the low-pass filter. The loop structure is shown opposite.?

The divider is controlled by a form of sigma delta modulator known as a MASH. The division ratio N+?N is not confined to N and N+1, it depends on the number of stages (order) of the MASH.?

MASH output, ?N, is a pseudo-random sequence. The VCO frequency is governed by the long-term mean of ?N which is exactly F/M.?

The MASH structure is a series of first-order sigma delta modulators, each fed by the quantisation error of the previous stage. ?? modulators are widely used in A/D and D/A conversion, to achieve high resolution from fast low resolution (e.g. 1-bit) converters by oversampling. The ?? modulator is followed by a low pass filter. Conveniently, in A/D applications, it’s a digital filter.