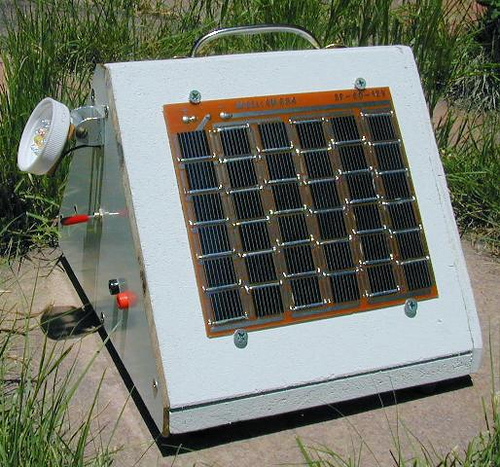 Tired of always spending money on flashlight batteries only to have them fail just when you need them? Try this simple circuit out. The white LEDs are quite bright, they provide enough light to illuminate a small room at night.
The solar panel puts out about 60ma of current, this is enough to float-charge the 12V gell cell without overcharging. With this limited amount of current, a charge controller is not required. Other batteries may be used such as smaller lead acid batteries or NiCd cells (use 10 in series), but overcharging and leaking battery goo may result if you exceed the battery charge ratings. A smaller and lighter 3.5 Amp Hour 12V lead acid battery has been successfully used in a different version of this circuit, the price is about the same as the more common 7 Amp Hour battery.


There are 3 series strings of LEDs in this circuit, the resistors limit the current through the LEDs and prevent them from burning up. The white LEDs have a higher voltage drop and only 3 can be used in series with a 12V (11-13V) source. The red/orange/yellow LEDs have a lower voltage drop per diode, so 4 can be wired in series. The colored LEDs are optional, they are used to increase the red side of the color spectrum. White LEDs can be expensive. If you are on a budget, try building the light with just one string of three white LEDs and a single resistor.

It is possible to adapt this basic circuit to work with a lower battery voltage, such as 6V. At 6V, the lamp circuit would need to be changed to one white LED and one resistor per string, and a set of red/yellow LEDs and one resistor per string. The resistor values would need to be changed to maintain a 20-25ma current through each LED. A lower voltage solar panel could be used to charge the 6V battery, a 7.2V (open circuit voltage) panel would be a good fit.