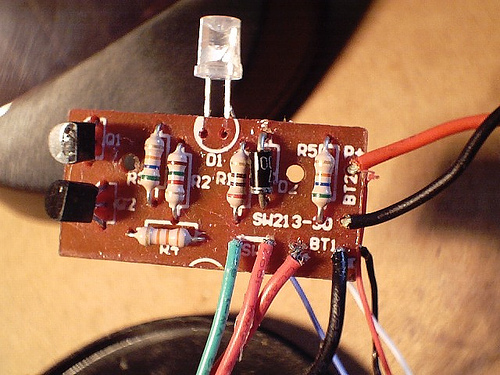 Some working notes about the use of a microchip PIC 16F676 to analyse and measure the effectiveness of the garden solar light.
I wanted to measure how long the battery was being charged for and the how long the LED is on for.Could I use a PIC with A/D and a serial EEPROM to measure how long the LED was on , how long the battery was being charged, and see if the design was optimised.I traced the circuit of the solar light, and using a couple of cheap alarm clocks as timers I could measure the Charging duration and the on time.The alarm clocks are the Quartz mechanical types, I used a transistor to turn on the battery, and therefore I could measure the on time for up to 12 hours.

Reset the time to 12:00 when you leave, come back within 12 hours and see what the time is now and you have a cheap timer!

You have to use a mechanical clock, not an LCD one, as the the LCD ones reset when you remove the power. You can buy dummy AA batteries from Maplin, which makes connecting to the clock much easier.

To measure the charge time with an alarm clock, I replaced the series diode from the Solar cell to the battery with a transistor Base Emitter.

I then used the transistor to turn on the battery to the clock.


Even in February, I was getting 9 hours of charge, Using another clock, I could measure how long the LED was on for. I connected the Clock across the LED, as when it is on, The clock is on. However, this did not work very well as the clock takes power in pulses every second, and the solar garden light circuits uses a Schmitt trigger to keep the light on.

The next thing was to use a PIC with some A/D converters and a serial EEPROM, and log the voltages around the circuit.

The serial EEPROM was too difficult to achieve, so I used a counter approach.

I had an array of counters, which were incremented depending upon what was happening. Every tick, the values were output in hex as serial and could be logged using hyper-terminal, captured and processed.