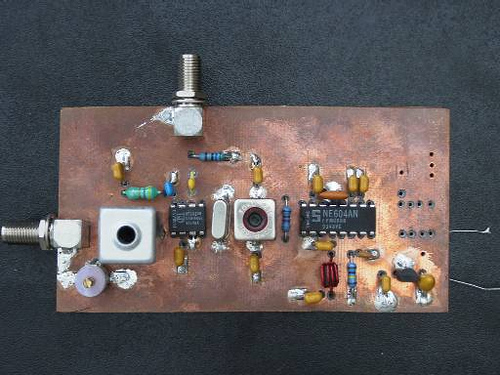 This DC to 50 MHz spectrum analyzer uses a standard oscilloscope for display. Dynamic range is better than 70dB using the received signal strength indicator (RSSI) of an FM demodulator IC.
The prototype was constructed as 6 modules:

Why so many? The design was experimental. I didn’t know how much gain would be needed to raise the VCO output to the required level until I’d built and tested it; and I didn’t want to put too much on one board in case something went wrong! Each module was tested separately. I built two versions of the second IF to try different crystal filters.


The VCO is a varicap-controlled FET LC oscillator with an emitter-follower buffer. The amplifier is a pair of cascaded MSA-0404 MMICs. I’m not going to describe these two modules in greater detail because I recommend using a commercial VCO such as the Mini-Circuits POS-300 instead. This can be mounted adjacent to the first mixer. Its compactness, frequency span and linearity are unbeatable.

I won’t describe the second local oscillator either except to say it was a 5th overtone butler circuit using a made to order 159.3 MHz crystal. Next time, I’ll use the NE602 internal oscillator, which, according to a Philips application note3, is reliable up to the 7th overtone. It isn’t the best mixer at 170 MHz, it’s noisy and the input match is tricky from 50 ohms, but it’s simple. You could even use a LC oscillator.

Article by Andrew Holme at http://www.holmea.demon.co.uk/