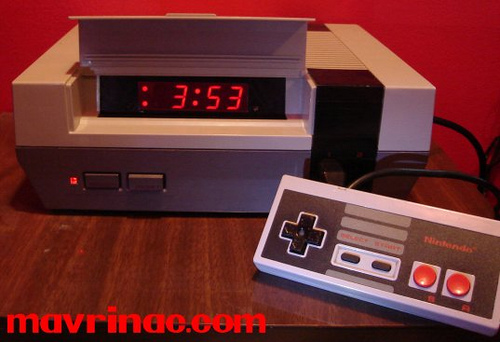 The author made a funky alarm clock out of an old Nintendo console. It is a little alarm clock, based on the Sanyo LM8560 digital alarm clock IC and the NES unit.
The author secured all the components inside the console, glued the speaker to the inside of the top where the air vents are, and cut a little faceplate to mount the LED display in out of black plastic (from a VHS case). He wired the Player 1 controller port to wires on the clock that would allow me to set the clock from the outside with a rewired paddle and also wired the Reset button to the snooze input on the clock’s main IC. He wired the Power button to the output for the alarm indicator, and would have wired it directly to the Alarm On input on the IC as well, but there were two problems with that: one, the Power button is a SPST switch, and two, a quick check on the IC’s data sheet showed that the Alarm On input is actually an Alarm Off input.
Strapped for components, he did the ultimate kludge job and the crown jewel of this hack: He soldered the prongs of a 24V DC adapter directly to the mains, and used it (switched by the Power button) to drive a 24V DC relay controlling the Alarm Off input as well as the Power LED and the alarm indicator in parallel. Yep. Needless to say, as soon as he finished this part, the box was screwed shut never to be opened again.
Rewiring the paddle was a cinch. He just desoldered the communication chip, scratched a few traces to break some unwanted connections, and soldered the conductor leads to be switched by the appropriate buttons. One complication: there aren’t enough conductors in a standard NES paddle to actually use all the functionality; pushing A and B alone will set the hours and minutes on the time, and holding either Start or Select will switch to setting the alarm.He was also going to have the D-pad as an alternate snooze, but oh well.