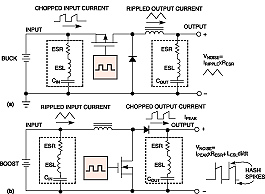 RF-communicating computers and other new mobile systems can act as portable generators of unwanted noise and EMI, thereby hampering their own market acceptance.
Problems with power-supply noise are seldom as dramatic as these cases. Instead, system designers usually resolve problems during the R&D phase; end users indirectly—if at all—see problems only as delays in the product’s introduction.

Noise is particularly interesting for portable systems because the power supply is often a custom design, created by the same team responsible for the logic board, analog circuitry, and other subsystems. For a portable system, then, you can’t just procure the power supply as a black box with guaranteed specifications of maximum output-noise levels.

The gate-bias generator for a GaAs MESFET offers a good example of low-noise requirements in a power supply. A typical GaAs transmitter employs the depletion-mode MESFET in a common-source configuration, so the gate needs a negative bias voltage. Any noise on this voltage mixes with the RF signal and produces undesirable intermodulation products, which, in turn, produce unwanted AM sidebands on the RF carrier. The AM bands are impossible to filter if they fall within the RF channel, so you must first specify a clean dc-bias voltage.

Noise in portable systems takes several forms. The major types are input, output, radiated, and microphonic. Input noise generally comprises reflected ripple, in which the input-current noise of a switch-mode power supply interacts with the source impedance of the raw supply voltage. Combined with any RF noise, which may be induced by high-speed logic and coupled back through the power supply to the input, the resultant disturbance can pollute the ac-line and battery voltages.

Output noise is voltage noise that might upset noise-sensitive loads such as Creative Labs’ (Milpitas, CA) SoundBlaster audio electronics. Radiated noise can be electromagnetic or electrostatic and usually originates in magnetic components, such as transformers and inductors, in switches and rectifiers, or at switching nodes that have large, fast voltage swings.

Microphonic noise is audible sound, the usual cause of which is low-frequency switching waveforms that excite coil windings and cause them to vibrate against each other mechanically. You can usually cure this problem by raising the minimum frequency or by applying varnish to the windings.


The worst noise generator in a portable system is almost never the power supply itself. From the power-supply designer’s perspective, a notebook computer, for instance, comprises a battery, the power electronics, and many relatively unimportant loads, such as the CPU, the RAM, and the I/O. From this power-centric viewpoint, the CPU is a big heat source that generates lots of noise and EMI.

Who’s to blame when the load induces noise on the supply rails? Logic designers can easily blame the power-supply designers by saying “if the wretched power supply had lower output impedance, all my logic noise would shunt to ground, and everyone would be happy.” The point is that load-induced noise is a system-design issue. To ensure that everyone is happy, including the purchasing department, logic and power-supply designers must cooperate.

Start-stop clock operation illustrates this need for cooperation. The usual brute-force method for curing Ldi/dt spikes, which large-load transients cause, is expensive: Connect low-impedance bypass capacitors across the load, making the transients smaller and slower by the time they reach the power supply. This method works, but other approaches can be more cost-effective and space-efficient.

If, for example, the dc output tolerance is tighter, say ±2% instead of ±5%, then the Ldi/dt dip and overshoot need not carry VOUT beyond limits that the logic can tolerate. In other words, a tighter tolerance on the voltage reference can improve the system by reducing the size and cost of filter capacitors.