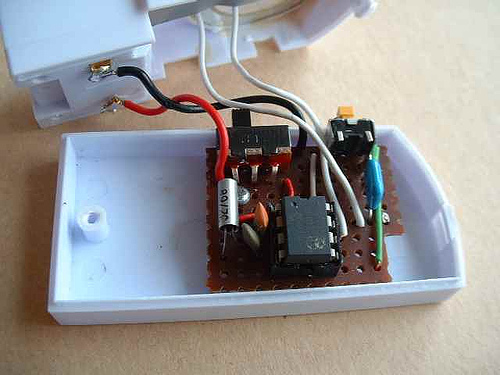 Here is a design to turn a cassette recorder on at the times of the BBC Radio 4 Shipping Forecast. It is intended to be used at sea or on a mooring, possibly when the crew are asleep.
My Original design original design used a PIC16F84, and was relatively easy to use and quite simple in function. I decided to port my design to an 8 pin device, to make it smaller.

I do not have the ability to use custom LCD displays or use surface mount devices, so the design is limited to an 8 pin PIC12F675, using one button and LED and a sounder. So here is a design. It is still not perfect, and much more complicated than it seems.

The user is expected to set up the cassette recorder and radio to record Radio 4 as you would if you were to record it live. Use the button to toggle turn off the power.The original design turns on the radio cassette recorder when the Shipping forecast is broadcast.

However, you need to be able to set the time. The original design allowed the user to set the time by use of two buttons, NEXT and SET. You use NEXT to toggle on and off. The SET button is recessed and used to enter the Time Setting mode.

The functions for the timer were: