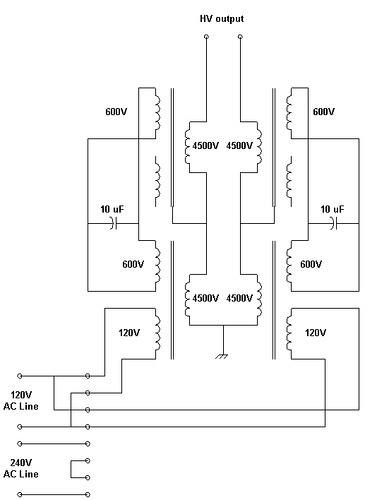 Like a lot of experimenters, I started with a neon sign transformer as a high voltage source. Common neon sign transformers cost about 80 dollar and put out about 15kV (no load) and around 30 mA shorted, although you can get lower voltages and currents easily.
A neon sign transformer limits the current by its construction with a high leakage inductance, which essentially puts an inductor in series with the transformer. The impedance of the series inductor serves to limit the current, while not dissipating much power (as a resistor would). This is desirable when running a discharge tube, because the tube has a negative V/I characteristic, and if driven from a stiff voltage source, it would draw more and more current until either the tube or the transformer melted down. The same technique for current limiting is used in arc welders, although at a somewhat lower voltage and a lot more current.

However, we all want more voltage or current. Let’s look at voltage first. You could just increase the primary voltage, which will raise the secondary voltage in proportion. There are two basic limits to this approach. The first is that the insulation on the transformer isn’t necessarily good to much over the nominal voltage. They have already gone to the expedient of grounding the centertap to reduce the voltage requirement. You might get to 20-25 kV before you started having problems. The second problem is core saturation. They don’t design transformers with a lot of extra iron, because it is expensive and heavy. As you increase the voltage, you need more area in the core to keep the flux density below the saturation level for the iron. If the core saturates, you draw more power, but it essentially all goes into heat. You can see this if you hook a 0-240V autotransformer up to just about any 110V transformer, and gradually increase the voltage while monitoring the output voltage at no load. Around 150-160V, the output voltage stops rising proportionately, and if you look at the waveform on a scope, it becomes quite distorted.


Now let’s look at current. What limits the current is that series inductance. In theory, you can put in a capacitor of equivalent impedance (although opposite in sign, of course), which will allow more current to flow. The problem with this has to do with cost and availability. Say your neon transformer is rated at something like 400 VA, i.e. it draws a short circuit current of around 4 Amps. The equivalent series reactance providing the current limiting is about 25 ohms, or about 60 mH. A capacitor to just cancel this would also be 25 Ohms, or about 100 uF. The real problem, though, is that the transformer is designed to run at a particular power, and if you increase the current, you increase the heating from the I2R losses and core losses. Draw twice the current, and you have 4 times the heating, which will probably melt the insulation.