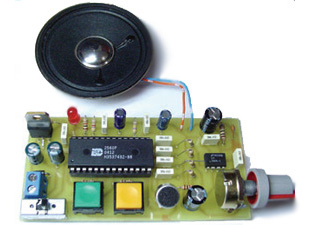 This project is based on ISD2560P IC which allows you to record 60 seconds voice and then playback it with very high quality. As shown in the schematic, the input soruce is an electret microphone.
If a dynamic microphone is used, R2,R3,R4 resistors and C3,C5,C7 capacitors will be omitted and microphone will be connected to the 17 and 18 numbered pins directly. Since it has better frequency response, we choose electret microphone in this project.

Controlling the circuit is very simple. Sw1 switches between record and playback modes. Push button B1 is used for start and pause functions. B2 stops the process.


To record voice, first move Sw1 to the record position and then push B1 once. IC will start recording and during this process red LED will bright. One push to B1 pauses and second push continues recording. You can record 60 seconds by this way. To stop recording push B2.

To listen the voice recorded before, move Sw1 to playback position then push B1. During the playback process red LED will bright again. One push to B1 pauses and second push continues playing. To stop playback push B2.