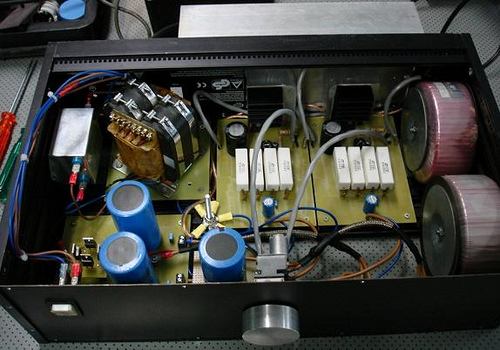 Jochem followed the Class A MOSFET Amplifier Schematic with the following exceptions. Instead of the 2SK1058, I used the 2SK2221 mosfet which he had on hand. The other change was to use a 6800 uF capacitor on the output instead of a 4700 uF capacitor.
Power Supply
For the power supply, Jochem made some changes. For the rectifier bridge, he used four BYW 29/100 diodes. Around the diodes he placed 100 nF capacitors to filter out any switching noise. Wima 1 uF capacitors were placed in parallel with the 10000 uF capacitors used for filtering. Initially, he had used the secondary coil from a transformer which measured about 1H. With this configuration, I was experiencing hum in the output.But he was informed that a transformer cannot be used as a choke. A transformer does not have an air gap and will therefore “saturate” quickly. This means it will have no inductive effect and is therefore no better than a resistor. he settled on two toroid chokes which measured about 1H each. With proper chokes, the hum was essentially inaudible.