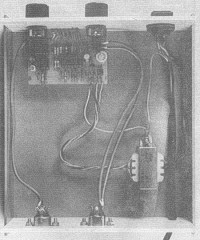 There are some excellent Dolby licensed decoders available for home use, however these tend to be rather expensive. The unit presented here is a “sound-alike” circuit which, whilst not preforming as well as the real thing, still gives superb results for a more affordable price. The only other requirements are a small amplifier and a pair of cheap speakers.
How it Works – General

Constructors requiring more information on the “Dolby Stereo” system in general are recommended to read the excellent article on the subject by Robert Ball in “Electronics – The Maplin Magazine”, Issue 37.


To extract the signal, basically all that is required is a fixed left minus right network. However, for better realism the extracted signal requires additional processing in the form of a short delay, typically between 12mS and 25mS, in this case 16mS. The purpose of the delay is to make any front channel sounds that stray to the rear channel, less noticeable. This is achieved by confusing the ear; since any stray sounds will come from the front channels a few milliseconds before the rear, they will appear to originate from the front. The delay also gives the sound more depth. A similar delay is also used in licensed Dolby decoders, and is allowed for by the film makers.

Before the delay circuit is a low pass filter, to limit the bandwidth of the signal to just below 4kHz, half the delay sampling frequency (8kHz). The delay is followed by a similar circuit, to remove the sampling frequency from the signal. In addition, this filter also gives a degree of bass boost (+6dB below about 300Hz).

Limiting the bandwidth in this way does not significantly detract from the performance of the unit. The bandwidth of the surround signal in a proper Dolby system is only 100Hz to 7kHz, and the upper end of this can only be achieved by using Dolby licensed noise reduction circuitry to remove stray signals. The surround channel exists for effect, not for listening to in its own right. So as long as the Left and Right channels are of reasonable quality the overall result will be fine!