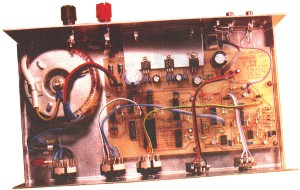 Like many owners of stereo satellite receivers or NICAM stereo equipment, I have connected the audio output to my hi-fi system. This gives a vast improvement in realism, particularly with films. However, by comparison to the cinema, there is still something missing! One thing that really makes a visit to the cinema memorable is the Dolby Stereo surround sound system.
Surround Sound Operation

The professional system used in cinemas has four channels, Left, Right, Centre and Surround. The Centre channel is necessary in a cinema, to ensure that people sitting to one side of the auditorium do not miss the effect. It also fills the gap caused by the Left and Right speakers being so far apart. A Centre channel has not been included on this more basic home system, since the effect does not have to cover such a wide area.

When the system was developed, the most common cinema film format was 35mm, which has provision for only two sound channels (the 70mm format now commonly used in larger cinemas has four sound channels). This presented Dolby with the problem of encoding four channels into two, in a way that could be replayed successfully on a two-channel stereo system without a suitable decoder.

A basic form of the encoding system is shown in figure *. The Centre channel is attenuated by 3dB and added equally to both the Left and Right channels. The Surround channel is attenuated by 3dB before passing through a filter circuit having a pass band of 100Hz to 8kHz. The signal then passes through a pair of phase shift circuits, before being added to the Left and Right channels, as shown.

If this is replayed on a stereo system without a decoder (like the cinema in the author’s home town, until recently), it will sound fine. The Centre channel sounds will come from the Left and Right speakers equally, and will therefore appear in the Centre. The Surround signals will also come from both speakers. However, the 180 degree phase shift between the two channels will give this a very wide effect.


A basic decoding system is shown in figure *. This is based on the original Dolby Surround system, used in older cinemas and this project. Most modern cinemas, and the more expensive commercial home decoders, use the Dolby Pro-Logic system.

The Surround channel is extracted by a subtraction (Left minus Right) network. In this design an op-amp circuit is used. The resulting signal is then amplified by 3dB. The signal then passes through an audio delay circuit, with a delay of between 10 and 30mS. On this unit the delay may be switched to either 12 or 24mS. If sounds come from both the front and surround speakers, those from the rear will be regarded by the brain as echoes and ignored. The delay also gives the sound field greater depth. Following this is a noise reduction circuit. This will reduce any stray low level high frequency sounds, while allowing louder sounds to pass unhindered. The delay and noise reduction circuits may also contain filtering components, to limit the bandwidth to the 100Hz to 8KHz specification.

This system is relatively simple, and the limitations are apparent. The delay and noise reduction systems are present to remove stray signals from the Surround channel, caused by slight imbalances and phase shifts in the replay system. The more advanced Dolby Pro-Logic system uses active signal channelling technology to ensure that any particular sound comes from one speaker only. This uses DSP (Digital Signal Processing) or similar technology, which is inevitably protected by copyrights and patents. This cannot be simulated in a form that is cost effective for home construction.