The GEM: Class-A and AB Amplifier 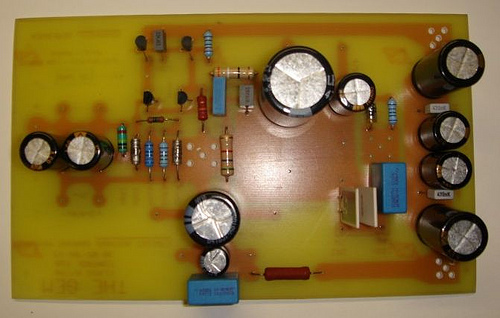 The Gem is an audio power amplifier embodying simultaneously active Class A and Class AB output stages for 100 plus Watts into a 4 ohm loudspeaker. The front end pcb will drive up to 100plus W variants, or the 200plus Watts version into a 4 ohm loudspeaker load. The circuit for this design developed out of some 35 years of on,off investigations into the John Linsley-Hood, MIEE, 1969 class-A amplifier. It has been named in remembrance of the late father, Gordon Ernest Maynard, who supported my interest in audio,electronics,radio,etc. from a young age
This circuit was intended for use with modern 2SC5200-2SA1943 power transistors, yet it has been successfully constructed using other device types, including a single Sanken 2SA1216+2SC2922 pair in place of the paralleled 100+W AB outputs. Feel free to use whatever transistors are to hand or in your ‘salvage’ box because the parallel class-A plus class-AB operation will make better use of obsolete / scrap devices than can conventional amplifier circuits, including the old and almost indestructible industrial 2N3055 based series

Keep VAS, Zobel and output related wires at least 5cm/2″ away from input devices and wiring. Use a star earth, star power distribution points from each fused psu rail low ESR 10mF at the pcb, and a star output node connection. It is also essential to use separate wires between the negative star node, the PNP output collectors, and the class-A emitter resistor to prevent class-AB current peaks from voltage modulating the class-A stage via wire impedance.