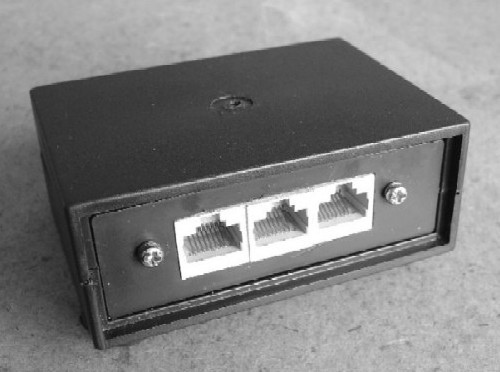 The network adapters are normal Intel and 3Com models, set to 10 Mbps and Half Duplex. The computers are labelled A, B, C, and the UTP cables from the computers to the hub are 10, 16 and 35 meters long, respectively.
While working half-duplex, each Ethernet adapter is continously monitoring its recieving pair of conductors (pins 3 and 6) for any traffic and will not start sending its data as long as anything else is being transferred through the medium. Even when already transmitting, the Ethernet adapter will fall silent as soon as any other traffic appears. This event is called ‘collision’ and is resolved by both computers waiting for pseudo-random periods of time before trying again.


So in this mode of operation the hub’s vital task is to enable each adapter to ‘hear’ everything others transmit, but at the same time to prevent each adapter from hearing itself sending data – and falsely detecting collisions.