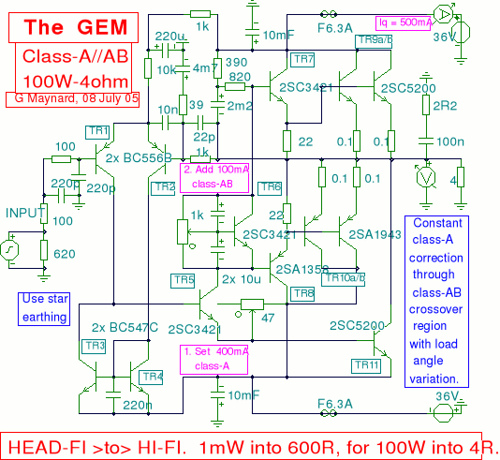 A Class A // Class AB amplifier rated 100 Watts when driving a 4 ohm loudspeaker. This circuit was intended for 2SC5200 operation, yet it has been successfully constructed using other device types, including a single Sanken 2SA1216 plus 2SC2922 pair in place of the paralleled ABs
The original ‘simple’ 1969 JLH class-A design provided excellent first cycle accuracy through mid and high frequencies (dynamic clarity) because there were no stabilisation components nor a series output choke, whilst the NFB error correction was established via the input emitter (some describe this as current feedback).

However it did generate rather a lot of heat, the damping was ‘soft’ at lower frequencies and the positive slew was weaker in the presence of loudspeaker system generated back-EMF at higher audio frequencies. I was eventually able to improve upon the original JLH circuit by;-

Thus, when compared to conventional circuits, one complete high frequency phase change has been removed from the closed feedback loop in order to minimise need for any additional stabilisation components that would otherwise render the circuit inductive at audio frequencies. The original JLH hf (current feedback) stability and simultaneously phase coherent class-A control are retained.