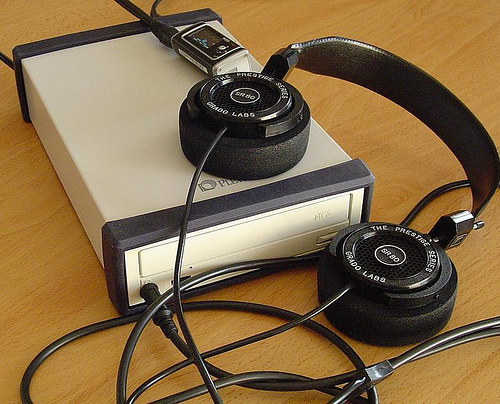 A simple headphone amplifier that uses an external CD-ROM for the project enclosure. The circuit topology is a simple single-ended Class-A amplifier stage MOSFET follower with an active load. The output device is an IRF610 MOSFET and a LM317 regulator is used as a constant current source .The sonic results are surprisingly good for such a simple design
This is a simple do-it-yourself (DIY) headphone amplifier project that is fashioned primarily after the Class A MOSFET Headphone Driver project by Greg Szekeres and to some extent Mark’s DIY Class A 2SK1058 MOSFET Amplifier Project. The amplifier concept is simple and follows a typical single-ended class A circuit utilizing an active constant current source (CCS) in place of a passive resistor. A CCS doubles the efficiency of the circuit over that where a passive load resistor is used, bringing it to a maximum of 25%


There are a couple of items to note. A FET follower circuit will be able to supply high current, but the voltage gain will be less than one. This amplifier will only be suitable in applications where the input signal does not require voltage amplification (such as the output of an mp3 player or computer). Also, a simple single-ended circuit like this will have no power supply ripple rejection and thus any noise in the power supply is going to go right through amplifier. For that reason, you will need to use a regulated power supply. Suitable inexpensive regulated (wall wart) power supplies can be purchased from Radio Shack. 10-20VDC and 750mA should be fine