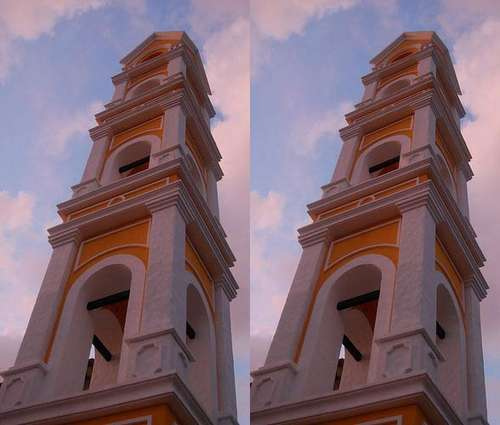 In this optical illusion we see two buildings and it looks like the building on the right is in danger of falling over and crushing everyone underneath. It is an architectural disaster
In fact, both halves of the image are identical. In this Instructable we’ll quickly go over a way to make one of these images on your own,First you’ll need a picture looking up at a building. Flickr is a great place to look. If you’re going to be using this image where someone will see it, be nice and use one that has a Creative Commons license

Look for pictures where the perspective is from below so that there is a distinct difference in the angles of the sides of the building. This gives a strong feeling of where the lines would converge. The second image shows where the vanishing point is.


The next step is to crop the image so that there less open space to the right of the building.

Now just repeat the image and you’re good to go!
Inspiration for this illusion from The Leaning tower Illusion.
Parallel items have the same vanishing point. So the vertical lines of these two buildings would converge on the same point if they were normal. since they are very divergent here, we are tricked into thinking that the building on the right is leaning far off to the side