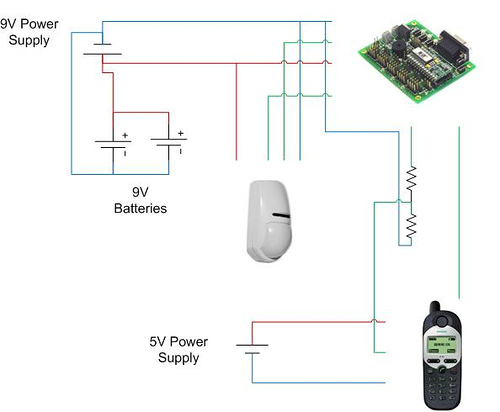 There is a 9v power supply connected to a pair of 9V batteries, these bats are connected in parallel and are powering the BX24 and PIR sensor. The other power supply is an old 5V Samsung cellphone charger that was dismanteled, i use this one to keep the siemens C35 charged, so if the power goes down i have 400mah(200+200) storaged in batteries for the Microcontroller and PIR Sensor and the cellphone battery for its own, this should be enough to keep the alarm online for a few hours.
Material Used:

1 – Lynxmotion Mini-ABB as carrier board for the BX24

– You may have heard AT commands when talking about old dial-up modems, since these set of commands were used to control the modem and its connections, in case of serial modems these commands were sent over a serial port.

– The thing that some of you dont know is that today cellphones support and use a set of commands called (AT Commands) that are very alike to their old brothers, you can access them via bluetooth if you phone has a serial protocol service or dial-up service over bluetooth or by cable using a simple hyperterminal like tool.

– In this case i connected 2 ports of a BasicX24 directly to the phones RX-TX, well not directly since BasicX24 is TTL (5V) and the RX-TX pins in the cellphone work better at 3V, i say better because with 5V i were able to communicate with the cellphone but when the connection was made the phone lost all the network signal so with 5V you can only access phone functions memory etc, no sms neither calls. Im not sure if this happens in all the phones but in this case (Siemens C35) it happened, to resolve this problem, a interface was built to downgrade the voltage from 5V to 3V, i used a voltage divider with a 12K and a 18K resistors.