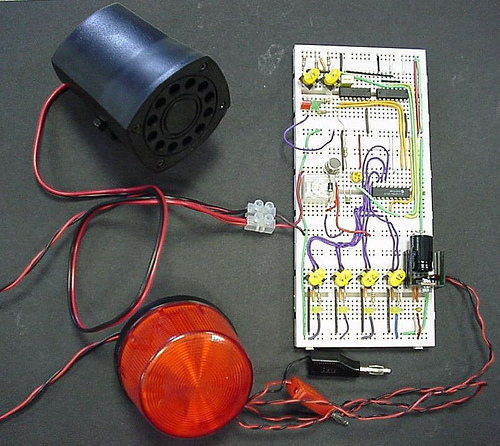 The project uses a PIC 16C84 to monitor 4 NC alarm inputs that when triggered, activates an output relay. The first zone triggered is illuminated with a solid lit LED, while the second and subsequent zones are indicated with a flashing LED.
System Details

When the alarm system is disarmed, no LED’s are activated, so there is only the IC devices activated, and so the current reading for the entire program is only 10.0 – 20.0mA. There is some slight variation because the PIC controller’s current consumption is not constant and fluctuates with the program section being executed.

If the user then presses the Arm/Disarm button, the armed LED (Green) lights to indicate the change in state. The current consumption at this point increases to 25-30mA, which is predictable as the only increase in load is that of the LED and protective resistor. As before, there are current fluctuations because of the nature of the PIC.

In this armed state, if any one of the Zone Simulator switches is pressed, then the PIC triggers the Alarm output pin. This is connected to the second status LED, the Alarm LED, and also to the base of the transistor. This fully saturates the transistor and allows enough current to flow to activate the relay, which switches the heavy load to the external strobe light and siren. Within another millisecond or so the LED corresponding to the Zone Switch triggered is illuminated as a steady, continuously on, supply. The current compunction at the moment is found by disconnecting the siren and strobe so that only the project’s readings are shown. In the state of only one device triggered, the current has risen to 130- 140mA, which when you remember the current though the relay coil alone is 100-120mA, is a sensible figure.


If any additional zone switches are depressed while the PIC is in this alarm state, there is no change in the Alarm output, but again the corresponding LED is illuminated. However this time, the trigger is known to be less important, and is indicated with a flashing LED output, as are any further triggers, (until all four zones are activated). In this way it is clear for the user to see which zone/sensor was activated first by the steady pulse.

As the LED’s are continually changing there on off status, the current readings change a lot, but peak at about 210mA. When connected to the strobe and siren, each which draw an additional 200-300mA, the total current is about 700mA

Assuming a current of 700mA, and a voltage of 12V, the total amount of power used by the project and the external alarm components can be calculated.