Adding Internal USB (and internal ReadyBoost) to a UMPC 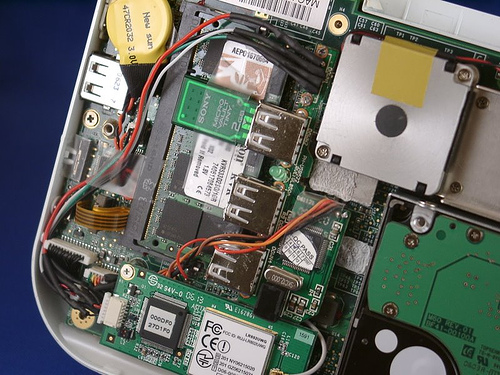 Identify the interface and pins on the internal USB port. Find a USB hub that will physically fit into the eo. Find a fast flash drive that will also fit. Cut and wire the internal USB port to talk to the hub. Wire a port on the hub to manage the WiFi or Bluetooth module. Get it all to actually fit.
That was tough. I burned my fingers several times, but got it done. Let’s walk through it.

The first step was the choice of hub. I chose the one above because it was very small and because the upstream port was already a cable so I would not have to solder another one on.

Initial fit looked good and it LOOKED like it was about the height of the heat sink, meaning the lid would close. The Flash drive was an easy choice: The Sony Micro Vault Tiny 2GB was both cheap and fast enough to use for ReadyBoost, even through a hub.


I was pleasantly surprised to see the PCB was cut away at an angle on the inside as well. The four wires that were previously connected to the USB cable were very disappointing though.
Each one fell off at different times during the project and had to be re-soldered back to the PCB. I removed the metal shell and plastic guide from one of the ports and soldered on some leads.

Heat shrink tube was especially important to this project. Soldering wires together isn’t enough… a little short in the UMPC could kill it. Remember to slip the tube over the wire before soldering.

The cable above was the most worrisome. It was small, of unknown pin-out, and if I destroyed it I would lose WiFi and Bluetooth on my UMPC making it useless to me. I Googled the part number and found the engineering manual for it including the pin-out, but had no indication of what was pin 1. A couple minutes with the multimeter fixed that.