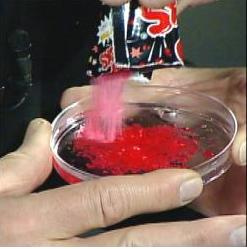 Pop Rocks are known as the exploding candy, and if you ate Pop Rocks as a kid, you probably remember the legend… if you eat Pop Rocks and then drink a soda, you will explode.
The Food and Drug Administration even set-up a telephone hot-line to assure anxious parents that the popping candy would not cause children to explode. While you can mark this one up as urban legend (in other words, it’s not true), there is some interesting science behind the world famous popping candy.


How does it work?

How are Pop Rocks made? How are Pop Rocks made? According to information from the manufacturer, Pop Rocks start like any other hard candy by combining sugar, lactose (milk sugar), corn syrup and flavoring. These ingredients are heated to the boiling point and the hot sugar mixture is mixed with carbon dioxide gas under high pressure (about 600 pounds per square inch). The process causes tiny high pressure bubbles of carbon dioxide gas to form in the candy.

When the hot candy mixtures cools and the pressure of the gas is released, the hard candy shatters into tiny pieces of carbonated candy. If you look carefully at the candy under a magnifying glass, you’ll see the tiny bubbles – each containing a small amount of carbon dioxide gas under high pressure (600 PSI). When the candy melts in your mouth, the 600 PSI bubbles of gas are released with a loud popping sound. Very cool!

So, will you explode if you eat Pop Rocks and drink soda? No… but you might get a pretty nice burp out of the deal.