A high voltage motor in 5 minutes 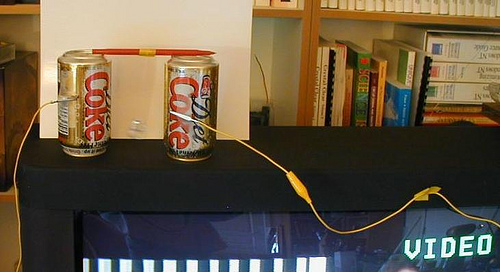 The toy is a high voltage motor that acts like a bell, with a clapper that bangs furiously from one can to the other and back again, sometimes several times per second.
The photo may be all you need to get the toy working.

Place the plastic rod on top of the two cans, so the pull-tab dangles freely about an inch from the table.

Tape the bare end of one wire to the left can. This is the ground wire, and the free end should be connected to an electrical ground, such as a cold water pipe, or the metal frame of a computer. If a good electrical ground is not convenient, you can just hold onto the free end, since your body is a good enough ground for this device.

In the photo above, you can see that the toy is sitting on top of a television. About two square feet of aluminum foil is pressed onto the face of the TV screen. It sticks there because the TV screen is highly charged with electricity. The free end of the right can’s wire is attached to the aluminum foil.

How does it do that?

Inside a television, a high voltage is used to send electrons to the screen at high speed, to create the picture. By placing a large conductor on the front of the screen, we can make a capacitor, to tap into some of that high voltage and put it to use outside of the television. The voltage is high, but the current is very small, so that touching the foil or the toy is no more harmful than touching a doorknob after scuffing your feet on the carpet.

The pull-tab and the can on the left starts out without any electrical charge. We say they are at “ground potential”.

Once it touches the can, the electrons from the can rush onto the pull-tab, until it has the same high voltage charge as the can it is touching. The pull-tab and the can now have the same charge, and like charges repel. The charged pull-tab is now repelled by the can on the right, and moves to the left.

The electrons in the can on the left are repelled by the pull-tab, and they move to the left side of the can, leaving the right side somewhat positive. This positive side attracts the negatively charged pull-tab, and draws it up to touch the can.

Now the excess electrons on the pull-tab move onto the left can, and into the ground. The pull-tab is now at ground potential again. It swings back towards the can on the right, and the whole process starts over again.