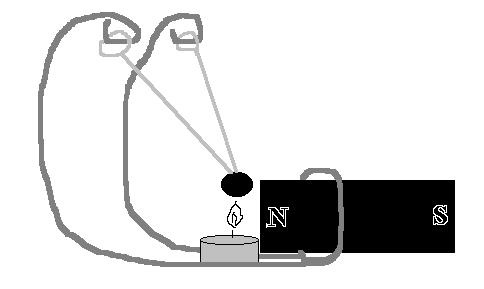 This heat engine is very simple. We suspend a small piece of magnetic material at the end of a pendulum. A large magnet is placed near the pendulum, so that the small piece of material sticks to the large magnet.
The magnet should be close enough that the material never rests at the bottom of the pendulum swing, but instead jumps up to the magnet. A candle is placed under the material, so the flame just touches it.

All the parts can be found at Radio Shack, but if you want to build the engine using a Canadian nickel, any hardware store will have the other parts you need.

You will need some copper or brass wire, a large ceramic magnet (the cheap kind that Radio Shack sells for about a dollar), and a candle.

We want the pendulum to swing back and forth only, so we use two wires to hold it up. Cut about a foot of wire and wrap the center of the wire around the large magnet. Then form the two ends into small loops and bend them up to form the support for the pendulum.

If you are using the rare-earth magnet for the pendulum’s weight, it helps at this point to demagnetize it by holding it in a candle flame. You can stick it onto a coat hanger and hold the magnet in the flame until it falls off. This will prevent the magnet from jumping onto the large ceramic magnet while we adjust the pendulum.


With the pendulum stuck to the large magnet, position a short (lighted) candle so that the flame just touches the weight. You may need to shield the flame from drafts so it remains steady. The flame will heat the rare-earth alloy until it loses its ability to stick to the large ceramic magnet. It will then fall away, and swing a few times as it cools. When it is cool enough to be magnetized again, it will rise and stick to the magnet, where the flame will again heat it up.

If the weight still touches the flame when it has fallen away from the magnet, adjust the pendulum’s supports a little so that the weight rests a little farther away. If the weight is so far away that the magnet cannot pull it back up once it is magnetized, adjust the supports to bring it closer. Be careful when adjusting the supports, since they may be quite hot. Also be careful to move the candle so as not to burn yourself on the candle flame. When the engine is adjusted just right, it will settle down to a predictable swing, often taking only one swing to cool enough to stick to the magnet again. It will run as long as the candle burns.

If you have chosen to use the Canadian nickel, you will need a heat source better than the candle. A small alcohol lamp or fondue pot burner will do nicely. You may have to make the pendulum support wires longer to make room for the lamp.

Why does it do that?

I have tried Ronson lighter flints, which also have a Curie temperature within easy range of a candle. The combination of their small size and low Curie point makes them stay above their Curie point too long. The magnet and the flame have to be close together for the engine to work. When the flints are close enough to the magnet to overcome gravity, they are close enough to the flame to rise above their Curie point. Other designs have been tried successfully, involving placing the flints on a wheel and using a soldering iron as a heat source. A magnifying glass could be used to focus the sun on the flint when it is touching the magnet, without heating the flint when it falls away. Experiment with other designs. There are many possibilities.