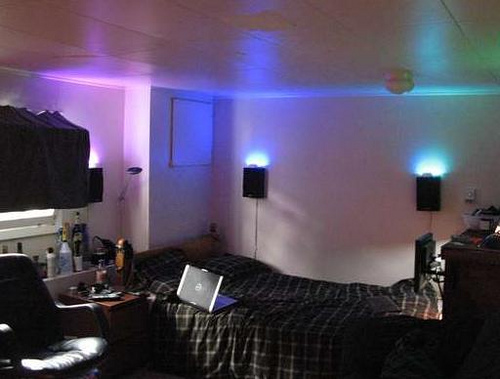 This instructable covers how to build, mount and control LED light bars to provide for full color ambient room lighting as well as ambilight style video effects.
Cutting the stripboard

To start off, I picked up a large piece of stripboard from my local electronics store. I cut this into pieces measuring (in holes) 4×57 as shown in the picture.

I drew lines along it with a sharpie, cut it most of the way through with a dremel, then it snapped fairly cleanly. A quick run with the dremel’s sanding bit and they were ready

Inserting the LED’s is pretty straightforward. I recommend drawing a line on the board the denote which contact is for the anode. The anode on my led’s was the longest leg so a black line from a sharpie made it easy to make sure they went in the right away.

The spacing between the holes in the stripboard does not match the spacing on the led’s so they could not be flush with the board. I pushed them in pretty firmly and they stayed in place fairly easily.

To mount the bars, I took one to home depot and found a piece of vinyl siding shaped like a U_ that it would fit into. I cut it into strips longer then the board, then cut off the extra mounting piece leaving just the U shape. I lay a strip of scotch mounting tape/foam down inside it and pressed the board in, then tucked the cable in between the plastic.


At this point I also ran some white electrical tape around the entire contraption so that the ends are not open. It’s not the ideal solution but it works for now. If you are really determined, you could probably cut pieces of siding to fit into the ends as caps.

To mount the entire things on my wall I used the mounting tape again. Just two little small squares on either end were sufficient.

Wiring up the controller

Common anode goes to the 5v in and the cathodes go to the different ports. I stuck it all in a box and cut a hole in the side.

I’m running the power for my controller off the power supply for my media pc. The power supply is rated for 20A on the 5V line, but this system requires around 12A. The controller is not capable of powering off usb unless you are doing under 500ma total and this is way beyond that.

I initially powered this off my 550w power supply in my pc but with this on my 5v line drops to 4.85v from it’s normal 4.98v and my usb devices start to act very sketchy. I grabbed a spare 400 watt very cheap no-name power supply which I had sitting around and it died after running this for 15 minutes. I recommend a decent brand which is separate from your computer.

If you want to use an external power supply, you can connect the green wire in the motherboard connector to a ground (any black) to power it on without a pc. You can find more details here or on google.