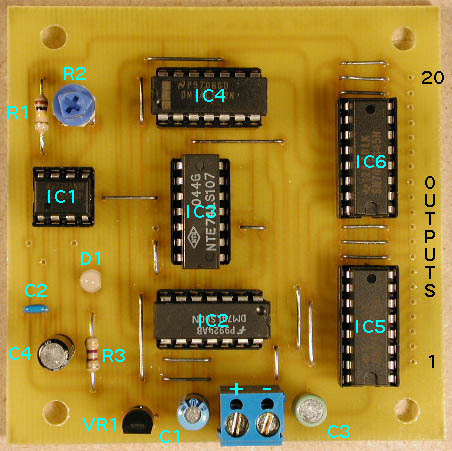 As logic circuits go, the 20 Step circuit is fairly simple but due to the high speed nature of the TTL Logic devices used, care must be taken when wiring these circuits. Simply put, The neater the wiring the better.
Basic Circuit Operation

The circuit is stepped through the sequence by an adjustable LM555 astable oscillator.

The Oscillators output is divided by a 74LS90 divider into a 10 step BCD weighted output.

The circuit does not drive the 74LS145’s directly but uses a 74LS107 JK Flip-Flop and four 74LS32 dual input OR gates to control to the inputs to the two 74LS145 output drivers. The 74LS107 and 74LS32 are used to create disallowed states in the output drivers alternately. The disallowed states prevent any of the ten outputs on that particular device from being turned ON while the other 74LS145 is in counting to ten.


This produces a system where only one of the 74LS145’s is able to produce a LOW output state at a time. In essence the circuit counts to 10 twice in succession rather than counting to 20 in a single cycle.

This may seem like an unusual method but it allows the circuit to make economical use of the open collector outputs of the 74LS145s decoder/drivers rather using output buffer ICs driven by 74LS138 logic devices.

The TTL logic devices in the circuit require a regulated 5 volt supply and draw approximately 60 miliamps. The outputs of the 74LS145’s can be supplied from up to 15 Volts with a maximum current of 80 milliamps.

The circuit above is shown in a continuous running mode. The circuit can also be externally stopped and reset as shown in later diagrams.