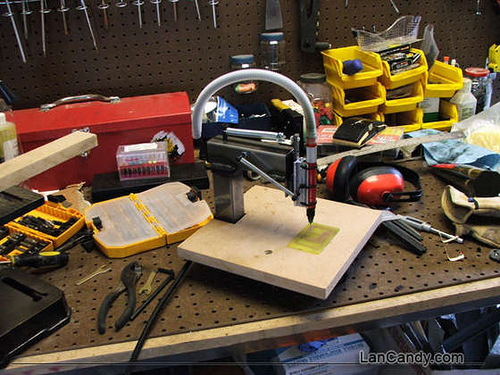 Want super clean holes in your latest PCB? Want your PCB drill-bit’s to last much longer? Tired of using your dremel as the drill press it clearly isn’t? For around $30, you can build this simple PCB drill-press.
This started when we (me and some fellow modders / hackers) realized we wanted a simple high-quality PCB drill dress, but didn’t want to pay $400+ for something that would only run at around 20,000 rpm. We also did not want to use the standard dremel drill-press for drilling PCB’s as they tend to break bits fairly fast, and PCB drill bits can be expensive.

The solution that we arrived at was to use a Harbor-Freight Pneumatic 1/8″ Micro Die Grinder, and attach it in-plane with a precision linear slide rail. The Micro Die Grinder runs at 56,000 RPM and has the 1/8″ collet that I needed for the PCB drill-bits.

The keep the die-grinder in-plane with the rail, we decided to mount the linear rail to a self-centering drill-press jig.

Start by cutting down the Auto-Centering Drill Press Jig. We cut it down to a couple of inches high. This allowed it to provide a good amount of support for the drill, but still be short enough to clear the twist-on/off valve on the drill.

We removed the excess sides of the self-centering drill press jig, and sanded all the rough edges smooth. The THK rail mounts vertically along the center. We used the measurement between the holes to drill through the drill mount.


The holes are easily centered along the mount by drilling in the V in the center of the mount with a small bit, followed by a larger bit and finally using a tap and die set to tap out the threads from the back of the mount.

This is the most critical step of the process, the Drill-Mount MUST be in-plane and square with the Linear Slide.

We then attached the other side of the rail to a small section of angle-iron. We did this by drilling out four holes that I had previously marked. Get these as close as you can to square with the Linear Rail.

If your angle iron isn’t square (ours wasn’t), then use a square and a sander to square it up.

This piece of angle-iron will be used to mount our Linear Rail / Drill Mount to the Frame.