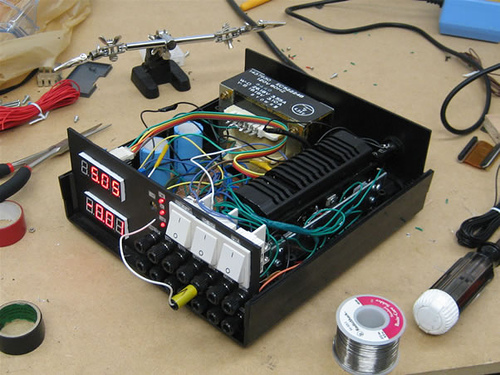 This is a bench power supply with regulated DC outputs -12V, -15V, +5V, +12V, +15V, and variable and one +35VDC unregulated output.
The first part of the circuit is the rectifying/filtering board. The idea here is to rectify and smooth the positive and negative sides of the AC current from a large transformer (must be center-tapped) to produce +35V and -35V DC with a common ground. These two lines are then fed to regulators which are connected to the jacks on the front panel.

Since I had a bunch of small prototyping PCBs (cheap from Hong Kong with factory defects), I used two and split the circuit into two parts: the rectifying/filtering board and a regulating board. In the end, however, the regulators needed to dissipate more heat than I thought, so I threw out the second pcb and mounted all the regulators on a hefty Pentium II heatsink I had laying around.


The bases among the TO-220 regulators used in this project are connected to different sources, so I had to find a way to isolate them. In the end, I mounted the 78xx regulators directly to the heatsink with sheet metal screws and sandwiched the LM317 and the two 79xx’s with a metal bar (which I also mounted with screws) to the heatsink, isolating them with some heatsink pads I found in the power supply of a 1989 IBM PS/2 Model 70.