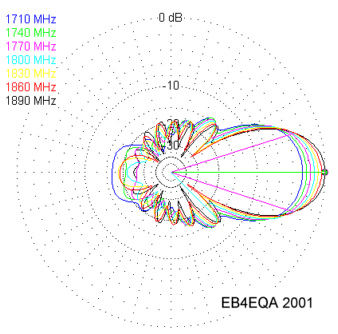 The antenna consists of 1,5mm diameter copper wire pieces. It is a classic yagi design by DL6WU, with a reflector, 10 directors and a split dipole (not a folded one!) as excited element. The elements are so small and lightweight that they can be glued to a small plastic or wood boom (anything but a conductive material). Here is the construction plan for the antenna for download. If you print it to scale you can trim the lenght of the elements and build the antenna directly on the surface of the paper:
THE DIPOLE:

Why a split instead of a folded dipole? Now, that’s a good question. I’ve experimented, read and studied the subject and finally decided to use a split dipole. These are the reasons I’ve found:

If I feed the model antenna in software with a split dipole, just to simulate how it would work in real world, with good results, why should I then use any other thing than a split dipole for feeding the real antenna?

I may get some losses because the split dipole does not have a 50 ohm feed point impedance, and it is balanced while the coax is unbalanced. But, I more than probably will get much greater losses in the balun and folded dipole, both difficult to build and impossible to model on today’s software.

As in any other thing in life, if I have two choices, none of them clearly better than the other, but one much more simple to get, which one will I take? Yes, the easy one (and that is the split dipole).

You must be very careful when choosing the coax. This frequencies are so high that you could get an enormous attenuation even with reasonable lengths of cable. If you use thin RG-174, don’t use more than one meter. With RG58 you could use a few more, but not many. Any cable thicker than that does not seem very practical to be connected to a cellular phone. It is also advisable to keep connectors away, but if you need to use them, use only N, SMA or BNC types. Never, never use a PL-259.

The way you connect the cable to the phone is something you’ll have to think by yourself. You could use the small antenna connector that most phones have, or you could just (as I’ve done) savage an old phone and connect the coax directly to the RF PCB in the phone. This way, you can skip the connector and other circuitry found at the antenna input, to keep the losses as low as possible.

To transmit, the cell-phone sites use panels with crossed polarization. That means that the orientation (vertical or horizontal) of your antenna should not make any difference in the strength of the signal. I’ve written “should” because I’ve noticed big changes in signal strenght when turning the antenna.