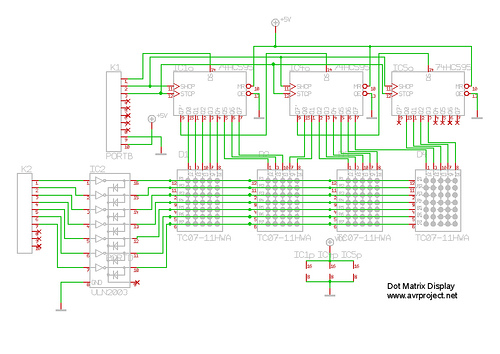 This is a Dot Matrix Scrolling Sign. A Dot Matrix Display has an 5×7 led matrix with 5 columns and 7 rows. The display is controlled by the AVR microcontroller. The rows are controlled by PORTB of the microcontroller, while PORTD puts the data on the columns to make the characters.
The circuit is stand alone and can be connected to the ports B and D off the AVR microcontroller. The circuit consists of three shift registers IC’s 74HC595 which switches each column of the displays sequentially on and off for 3ms. PORTB controls the the 74HC595. When a column is selected, the data for the column is put on PORTD, the signals from PORTB are amplified by the ULN2003, and switches the LED’s on and off. While each column is swithed on and off seqeuntially, the characters on the display are formed. The PCB contains all the parts except for the microcontroller part. The PCB has to be connected via the two 10 pin flat cable connectors to the attinyboard or the STK500 for example


The program code is made with the AVR-BASCOM compiler. There is a program for the ATTiny2313, which can show several moving messages on the sign.
There is also a program that is made for the ATMega8 which is more extensive, with this program you can enter a text with maximum 40 characters in a variable in the program, which is shown on the display. It has also a bigger character set.