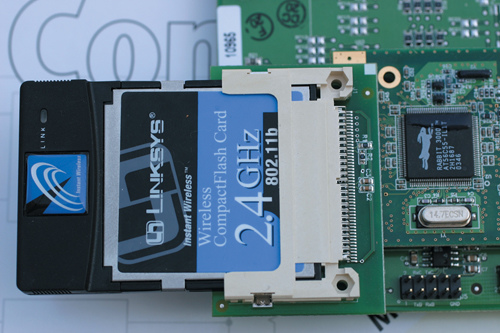 Wireless networking is easy, as long as you have the right tools for the job. Here is how to “get on the air” with Z-World Wi-Fi application kit, which includes a Linksys Wi-Fi card and RCM3100 module. Go wireless in no time.
WIRELESS API

where nic is always zero, and cmd is the Dynamic C Wi-Fi command. *data is the string, character array, or pointer to a structure. len is the size of the data field.

To command the Linksys wireless CompactFlash card to perform a scan, you must issue the API call in the following way:

To inspect the results of the scan, all you have to do is define a buffer (unsigned scanbuf[1000];) and call the wireless API:

As you can see in Listing 3, there are a number of API commands that can be issued in your wireless code. To set up the Wi-Fi application kit for IBSS mode, the Dynamic C documentation says to code IBBS in the parameter field of the WIFI_MODE command. This is a typo and the example programs will compile but they won’t run. I checked the API source code and the API is expecting to see IBSS in the WIFI_MODE parameter field.

The WIFI_OWNCHAN and WIFI_OWNSSID API commands are also used in Ad Hoc mode to define the channel and SSID of the independent station. I installed a second AP called CircuitCellar in a remote part of the Florida room and forced the Linksys wireless CompactFlash card to associate with it by coding CircuitCellar in the parameter field of the WIFI_SSID command.

WEP is enabled by coding:

Four sets of 13 bytes form the WEP keys. The transmit key is selected using the WIFI_WEP_USEKEY command. Private authentication is activated with the WIFI_WEP_AUTH command and a 1 in the parameter field.