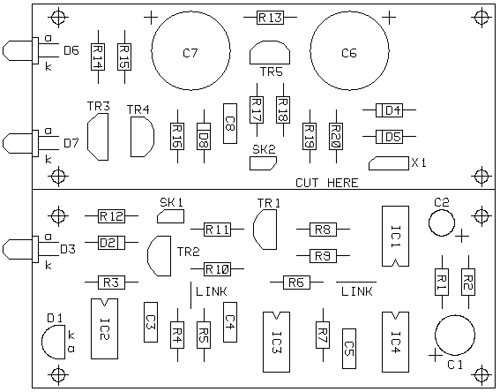 This project allows one to take the video recorder and satellite receiver remote controls upstairs, and operate the equipment from there. There is no additional cabling to install, the signal being carried along the existing coaxial aerial cable linking the two rooms.
Infrared Receiver

The infrared signal from the remote control is received by D1 (TIL100), which is connected in reversed bias mode. The reverse leakage of this device increased when it is exposed to infrared, causing a variation in the voltage on pin three of IC2.

IC2 (LF351) buffers the signal, which then passes to IC3 via a high pass filter. This filter removes low frequency variations caused by mains lighting. IC3 (LF351) has a gain of about two thousand, which increases the minuscule signal to something usable.

The variations in supply current to the receiver section cause a varying voltage drop across R20. This is converted to logic pulses by TR5 (BC558). C8, R16 and D8 cause short (8uS) pulses to be applied to the base of TR4. TR4 (BC548) and TR5 (ZTX650) are in a Darlington arrangement, and control the infrared LED.

The infrared LED (D7) has a maximum continuous current rating of 100mA, which would give a range of only a few centimetres. However the device has a pulse rating of about 2A, providing the duty cycle is short and the mean current does not exceed 100mA.

This gives a much-improved range and is the technique used in commercial remote controls, as well as this unit. C7 acts as a reservoir for the LED current, and is charged when the LED is not lit via R13. The current to D7 is limited to about 1.5A by R15; a red LED (D6) is connected across this resistor to give a visual indication that the unit is operating.

The circuit is powered by a small transformer, giving an unregulated supply of about 18V across C16. The supply reaching the infrared receiver section will be about 13V. A 100mA transformer is adequate since the current consumption is only a few milliamps when the unit is idle.

The units are connected to the aerial cable as shown in the interwiring diagram.

The DC voltage is isolated from the TV/video equipment by C9 and C10. This is a silver mica component which gives good performance at UHF frequencies. The high frequencies are blocked by L1 to L4, which prevent the circuit loading the signal.

There is inevitably some slight loss to the UHF signal; this has not been measured due to the author not having suitable equipment! No picture degradation occurred with the prototype, although problems may be experienced in poor reception areas.

For convenience the PCB’s for the two parts of the circuit are supplied in one piece. The first job is to cut this PCB in half. Fix the PCB to a bench or table with a small G-clamp, and cut along the dotted line using a hacksaw fitted with a fine blade. The four fixing holes in each section should now be drilled out to 3mm.

The PCB overlay is shown in fig **. There is nothing out of the ordinary about the PCB assembly – simply fit the components in the usual size order. The IC’s may be fitted in sockets, but since they are low cost devices this is not really necessary. Terminal pins should be used for the off-board connections. Do not forget the two links on the receiver section.

The LED’s and infrared photodiode are mounted in line with the edge of the PCB, about 10mm above the surface. This should be visible in the photographs. Check the height of the larger electrolytic capacitors, it may be necessary to lay these components on their sides or obtain small modern devices.