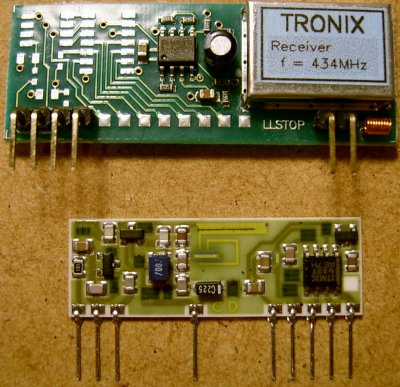 This is a general purpose remote control project with using programmable PIC microcontrollers. Schematics are shown for using infrared (RF) or radio (RF) media. If you are not familiar with microcontroller programming, you can use fixed encoder and decoder integrated circuits instead. Well-known such IC-s are Holtek HT-12D, HT-12E and Motorola MC145026, MC145027, MC145028.
Encoder methods

There are two different methods for encoding/decoding channel information:

for remote control – this page is about remote control. The information about which key is pressed is encoded and sent. You can press at most one key at a time on the encoder, and only the code for the pressed key is sent to the decoder. This is an efficient method for general remote control.

parallel channels – please see older codecs for such designs. The state of all inputs are encoded and sent. The input to the encoder is the state of buttons or TTL inputs. Every input channel state is encoded into each message sent to the decoder (one bit per channel), so TTL inputs can change asynchronously, and any number and combination of buttons can be pressed and encoded, the same state is reproduced on the decoder outputs. This method is suitable for modeling AND remote control, but messages are longer. Analog channels would also be possible, but are not yet implemented.

All the receivers have an indicator LED showing that a valid packet was received. Receivers can have different type outputs for each channel:

latched output – the last received state is kept. The channel output can be toggled on/off by a momentary button press, or the output can be turned on or off by specific ON/OFF-type transmitter codes